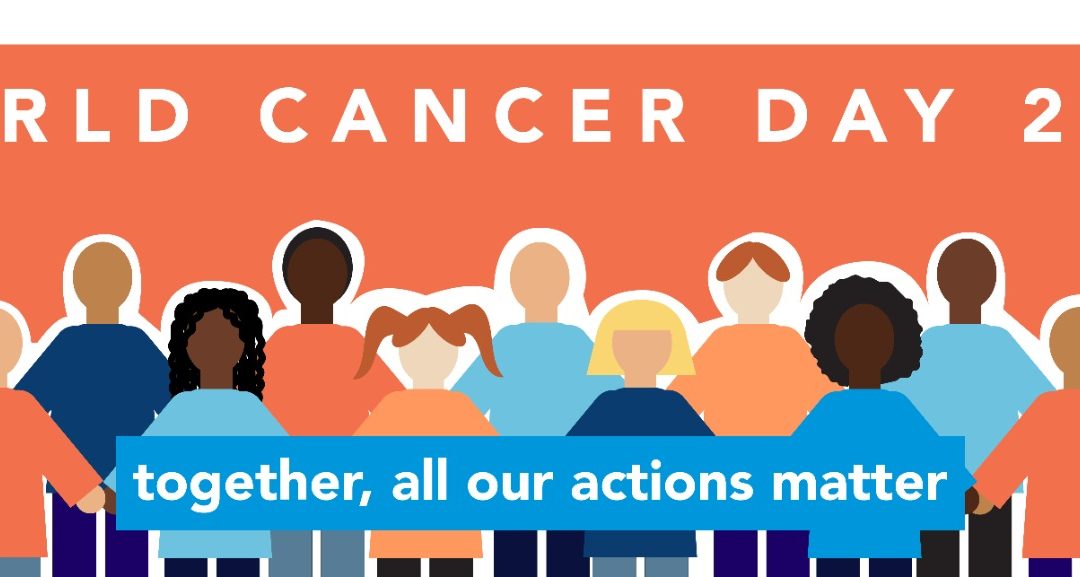 February 4th marks a critical day every year, commemorating an initiative dedicated to the fight against the global cancer epidemic. Led by the Union for International Cancer Control (UICC), this day is observed by UN Members, and originated from World Cancer Summit Against Cancer for the New Millenium, held in the year 2000, in Paris. At least 60 governments across the globe observe this day and show their support on parliament buildings  and through the public spheres. More importantly, this day marks a significant time for fighting cancer by battling misinformation, raising awareness, and reducing stigma. This year, the UICC declared the theme: “Together, All Our Actions Matter”. By recognizing the biggest issues regarding cancer, including: awareness, government action and responsibility; financial and economic burden.

To start off, this post is dedicated to a story. A story of a survivor who generously shared her journey with a student-led initiative at UBCCA: Stories-of-Hope. Following the story, this blog will share some ground breaking research and recent developments in oncology and cancer research related to our survivor. But let’s first start off with Vanessa Delle Monache.

Talking to campaign founder Krystle, Vanessa explained how “nothing could have prepared me for this cancer diagnosis”. At the age of 15, Vanessa was diagnosed with stage 4 Hodgkin’s lymphoma (HL): a cancer stemming from the immune system, with a cell known as “Reed-Sternberg cell”. Vanessa first discovered a lump on her neck: “ I found a pea-like bump on my neck”. It is common to feel no pain or even immediately realize the first symptoms of HL. “I don’t remember feeling sick” she continued, “my mom has told me that I had a lingering cough for quite some time”. For HL, she received five rounds of chemotherapy and three weeks of radiation treatment. Knowing this was over a decade ago, and even Vanessa explaining that “this was back in 2003 when cancer wasn’t as prevalent as it is today”, it is important to reflect on the scientific advances on HL and its treatments.

Over the last 5 decades, deaths within Hodgkin-lymphoma patients have fallen more rapidly than any other cancer type. Whilst targeted therapy stands as the more common form of treatment for HL and non-Hodgkin lymphoma (NHL), it has severe effects (discussed below). HL patients like Vanessa are actually less common than NHL. More recently, a study established last year discussed a new standard for treating children and young adults newly diagnosed with rapid growth of B-cells with a newly added drug (Rituxan, Truxma) that increased the overall cure rate from 87 – 95%. This new form of treatment specifically targets B-cells and  is effective for children and young adults who are diagnosed with a very aggressive form of lymphoma early on. Achieving a 95% survival rate is an outstanding accomplishment for both doctors and researchers.

As a result of most HL patients having subsequent types of non-Hodgkin lymphoma, their treatments differ. Patients receive different types of treatment based on their non-HL, which is categorized as aggressive or indolent. As a result, researcher’s continuous investigation into HL cells provided a genetic subtype of diffuse large B-cell lymphoma in a study conducted in 2018 by National Cancer Institute researchers. This explains why some patients respond differently to their treatments, making way for the development of specialized treatments for patients.  Moreover, researchers are looking to adjust standard treatment regimens to better equip the patient, as a way to improve the quality of life for survivors and reduce long-term side effects. Vanessa can speak to this, as she developed a second cancer after her journey with HL.

“When I turned 25, I began yearly breast screening” she explained, speaking of  her early diagnosis of breast cancer. It has long been known that a major concern for patients is the development of malignancies and second cancers following  treatments such as radiation therapy, studies showing an incidence of close to 50% at 40 years. Using high-energy rays or particles to target cancer cells, concentrated on specific tissues or glands such as lymph nodes in HL. Consequently, the radiation beam will extend to other areas including tissues and organs, exposing them, and eventually leaving the patient with side effects. This process of simulation within radiation therapy is common with HL patients. Therefore survivors of HL like Vanessa, are exposed to developing second cancers, such as breast cancer in females, due to the “mantle radiation [on her ] chest”. She knew the possibility of developing another cancer, but even so, she explained that “nothing could have prepared me for this cancer diagnosis”. More recently, a newer radiation therapy, Involved Site Radiation Therapy (ISRT) was introduced more recently, by “individualizing to the patient’s disease distribution” in order to avoid the devastating side effects and developments of second cancers. Introduced three years after Vanessa’s diagnosis, ISRT decreases the treatment area and helps speare nearby tissues from radiation.

While new treatment plans and innovation within research and clinical trials are good news, survivors and patients are often left with major psychological distress. Studies show that prevalent psychological and health effects that follow breast cancer patients and survivors are cancer-related fatigue, insomnia, and cancer related cognitive impairment. Experts suggest exercise and behavioural interventions are most necessary when addressing such symptoms. However, as a result of ongoing treatments, survivors like Vanessa and their resilience show us just how much their stories need to be heard: ““Battling cancer is exhausting both physically and mentally” she explained, “During this time, it’s important for your body to rest. Do not overdo it. Ask your family and close friends for help”.

Reflecting on today’s theme, we see just how much survivors can help us understand the battle against cancer. Without them, there is no envisioning success. Without a supportive community, government, programs or even simple donations, the fight against cancer will be exhausting. To find out more about HL and how to help, check out Lymphoma Canada: a nation wide organization focused entirely on lymphoma, continuing to support lymphoma patients and survivors. Highlighted in their annual report, LC will be funding multiple research studies to improve the health outcomes, healthcare and health systems for lymphoma patients.

Fighting cancer  will take more than the efforts of those affected. It’s about our actions as a community.

To find out more about today, visit the UICC’s website: https://www.uicc.org/what-we-do/convening/world-cancer-day

To share your story, reach out by filling this form: https://docs.google.com/forms/d/e/1FAIpQLSeUWf7UuLdxnWSxfv5QMeUk6CRjxYUT43FXEjq3nfgqh3u0vA/viewform